Are you a trail runner? How about an overall off-road triathlete? If so, then you may know all about the XTerra events held all over the world. The events include trail running races ranging from 5k to 21k and off-road triathlon's both short versions and long.


This year, as with most, the national championship competition was held at Snowbasin Resort in northern Utah. Although my girlfriend, Penny, and I did not compete for the National Championship, we did compete in the 10k trail run on Sunday, September 23rd.


It was my first time ever running any of the trails in that area and it was nice. It was a great event overall and left me wanting to compete in an off-road triathlon or two next year. So, that's what I'm beginning my training for now.


What was so impressive to see while at the event was that 21k National Championship. What some incredible athletes! The winner of that race, by the name of Max King, amazed me as he ran and won a 50k trail race in Oregon on Saturday, then flew down to Utah to compete in this race and won it easily with an approximate six minute mile average. I was in awe.


It was a good day and great experience and sure does motivate me to want to compete. 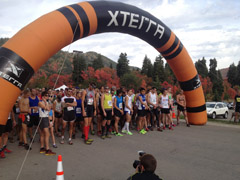